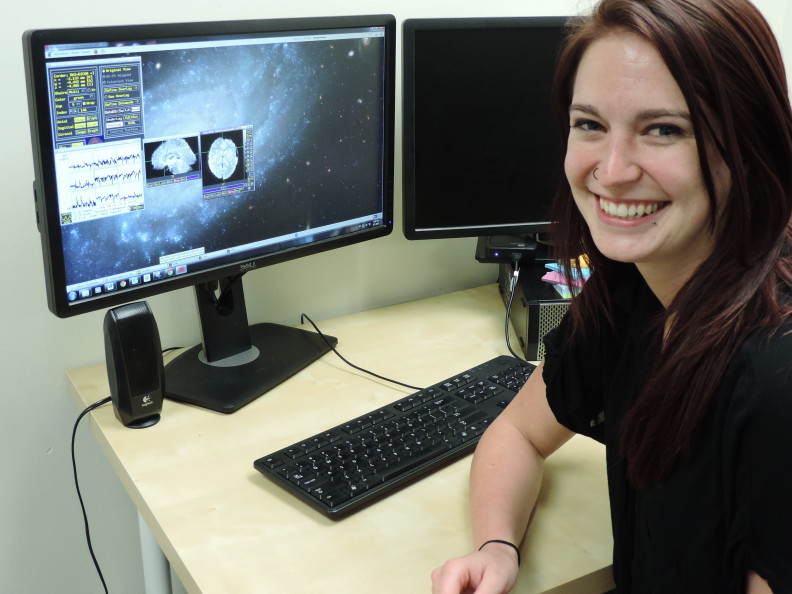 Naomi Wallace won the WSU 2018 Three Minute Thesis (3MT) award in March for her research presentation titled, “Developing Brains and Biological Clocks.” Naomi is an ARCS PhD neuroscience student in the College of Veterinary Science. She was among nine other WSU competitors for the award.

Three Minute Thesis® is a research communication developed by the University of Queensland wherein doctoral students have three minutes to present a compelling oration on their thesis and its significance. The exercise develops students’ ability to explain their research to a non-specialist audience. The first place winner receives $3,000 in a travel award to the research conference of choice.

Naomi earned her undergraduate degree in psychology from the University of Denver and became interested in how mental health and sleep are intertwined. She wanted to continue studying the intersection of these two topics in graduate school, and decided to research the effects of sleep deprivation and interruption on animals to learn more about the mechanistic parts of the equation.

“It’s not the same as sleep deprivation, but it does tend to be associated with a lot of similar effects,” she explains. “We put our mice on a light cycle that gives them a 20-hour day instead of a 24-hour day, and that causes their circadian rhythms to become desynchronized. We’re particularly interested in what happens in the brain in response to that.”

The 20-hour day means that the mice get the same amount of sleep as they normally would, but their sleeping schedule is fragmented—so instead of sleeping for several longer stretches, they sleep more frequently and for shorter periods of time.

“That alone leads to increases in obesity, problems with glucose tolerance−which looks like prediabetes−and other effects. We’re  looking for a way to prevent the negative neurological effects of circadian disruption and find potential targets that later down the road could be used to develop treatments for people who are circadian disrupted.”

Naomi’s advisor, Ilia Karatsoreos, focuses his research on circadian disruption and stress biology, and another student has recently joined their lab from the immunology and infectious diseases department. Naomi anticipates collaborations that will look at the immune affects of circadian disruption.

Naomi has a deep connection to WSU. Her father earned his Ph.D. here, and she grew up hearing about what a great place it is.

“There were a lot of good reasons to end up at WSU,” she says. “When I interviewed, I fell in love with the neuroscience department—and I also got financial support from an ARCS scholarship.”