In 1999, Washington State University Graduate School was designated as an ARCS recipient school. The first ARCS Fellowships were awarded to the College of Veterinary Medicine through the Seattle Chapter of ARCS. The Seattle Chapter is one of twelve chapters of the ARCS Foundation which has supported graduate education in the natural sciences, medicine and engineering.

By offering financial incentives to graduate students, the ARCS program further encourages the study of science, medicine, and engineering at the most prestigious universities in the United States. Since 1958, the ARCS Foundation has awarded over $66 million to support research in the fields of science and technology. Nationally, 14 ARCS chapters support graduate fellowships at 43 universities. ARCS Foundation Fellows possess outstanding scholastic records and proven abilities, and receive multiple offers to study at other top national universities.

Growing up in the Great Lakes region, Hannah Cook witnessed ways in which the environment had changed over the span of her lifetime. She said it feels important now more than ever to understand the life on earth that surrounds us before it disappears. She’s most interested in documenting the organisms that have been left under-studied despite their significance in maintaining our ecosystems. Her research thus far has involved understanding how insect populations respond to the rapidly changing environment. After earning her PhD, she hopes to continue academic research. Fun fact: despite working with wasps for over four years, she has yet to be stung! 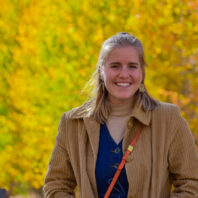 Cameron Coyle (pronouns: she/her/hers) is from Boise, Idaho. She graduated summa cum laude from the College of Idaho with her Bachelor of Science in biology, where she also was a student senator, lead student ambassador, varsity athlete on the women’s soccer team, and undergraduate summer research student. During the summers, she researched the effects of xenobiotics, including the pollutant aluminum chloride, on the functions of the phase II detoxification enzyme glutathione S-transferase in signal crayfish. Her interest in immunology and infectious disease stemmed from the podcast, This Podcast Will Kill You, where each week, the hosts explore and breakdown different infectious diseases. Cameron holds a particular interest in the relationships between host and pathogen, and vector and pathogen, in vector transmitted diseases. At WSU, she will rotate through three labs that study host-pathogen and vector-pathogen interactions, before selecting her home lab and PI to complete her thesis. 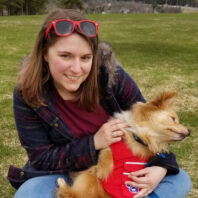 Samantha Dilday’s research focuses on the effects that blueberry pollination has on honey bee health. Blueberries are difficult for honey bees to pollinate, because the pollen is acidic and may increase occurrences of foulbrood. Furthermore, the resources lack key nutrients for honey bees. Samantha’s also an artist (scientific illustration), avid reader (favorite author is Terry Pratchett), a gardener and forager, and she has two dogs and a supportive partner whom she loves very much. 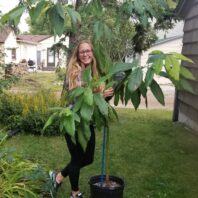 Augusta Finale earned a Bachelor of Arts in Russian and biology from Lawrence University in Wisconsin. She has always loved the interconnected nature of the natural world and has a wide range of experience in native ecological restoration of prairie, shoreline, and wetland ecosystems of the upper Midwest. She looks forward to expanding her knowledge of how plants, microbes, and fungi interact as part of biogeochemical cycles and their potential in remediating contaminated landscapes. Augusta aims to center her work within an environmental justice framework. She loves hiking and backpacking as well as going to farmers markets, and she enjoys live music. 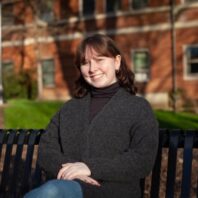 Kailie Franco earned a double Bachelor of Science in biochemistry/biophysics and chemistry from Oregon State University. She is interested in gastroenteric pathogens at least in part because her family has a long history with GI disease, caused both by pathogens and otherwise, and she wants to elucidate a drug to help treat, not simply manage, GI diseases, such as Crohn’s and IBS. Kailie looks forward to discovering new information about H. pylori and S. enterica in the Baylink Lab at WSU, where she will work to obtain her doctorate in immunology and infectious disease. She loves to spend time with her cat, Orion, and enjoys crocheting and gardening in her free time. 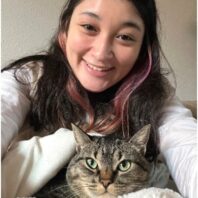 Siena Glenn earned two bachelor’s degrees from Oregon State University in microbiology and psychology. She has always loved studying the mechanism of actions, and by attending graduate school, hopes to continue to feed her curious mind. Siena works at The Baylink Lab, which investigates bacterial chemotaxis and bacterial antioxidant enzymes’ patterns. The goal of this research is to target two bacteria, Helicobacter pylori and Salmonella enterica stomach, linked to stomach cancer and irritable bowel disease. Siena and her cat Suki can’t wait to be part of the WSU community! 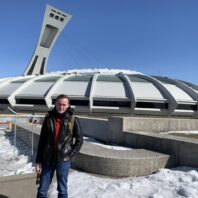 Mathew Heaney was born and raised in Omaha, Nebraska. During middle school, he was first introduced to the periodic table and chemistry through a book called The Elements, and the subject instantly captivated him. The interest led him to earn his BS in chemistry from Southern Methodist University in Dallas, Texas. Mathew said he always held a particular interest in radioactive elements, and coupled with the problems humanity is facing due to climate change, he’d decided to pursue research in nuclear fuel synthesis and properties. And since the field of research cannot be fully explored in the span of a PhD, he hopes to continue at a national lab. Ultimately, Mathew hopes to see the results of his research playing a role in averting climate disaster. 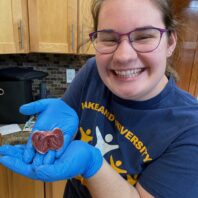 Tia Hoisington was born and raised in Green Bay, Wisconsin. She earned her bachelor’s degree in biology and chemistry at Lakeland University, a small liberal arts college not far from her hometown. Tia has had a variety of research experiences, with her most recent being in teratology and drug research at Charles River Labs in Mattawan, Michigan. She said that one day, she wishes to research fertility and gain a position that allows her to continue working in the field. In her free time, she enjoys being outdoors and reading. Tia also likes exploring new recipes and finding fun things to bake. Fun fact: she has an identical twin. 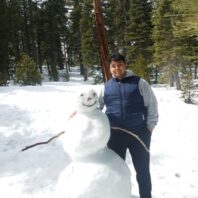 Paul Martinez is originally from California but was raised in Mexico. He spent many of his childhood summers in his mother’s hometown where the main source of income for many people is farming, including his family. And this is how Paul became interested in studying sustainable agriculture.

His research interest is to understand soil management practices and how they affect soil properties, ultimately nutrient availability for crop production from an interdisciplinary angle of vision. Paul said theses can be complicated, but he believes they can provide a holistic point of view to better inform farmers and allow them to make well-informed decisions. 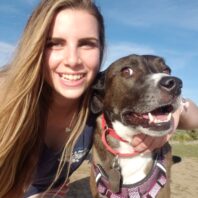 Haley Masterson has worked in Dr. Massaro Ueti’s research laboratory for over four years (Fun fact: they met playing intramural soccer and have been playing on the same teams for five years). She has an interest in vector-borne disease and has focused her research on tick-transmitted disease, such as bovine babesiosis in cattle and anaplasmosis in goats. Through her work with Dr. Ueti, Haley’s completed several research projects, including one that involved traveling, and collaborating, with other researchers in Mexico. Her ultimate goal is to build a career that allows her to combine her veterinary education with her passion for research and diagnostic lab work. She wants to apply the clinical thinking she’s learned (while obtaining her degree) to a diagnostic problem and use laboratory techniques to find a solution. Her personal interests include traveling to different countries, hiking various mountains in the Pac NW and elsewhere (she hiked the second tallest mountain in Ireland, Mt. Brandon), playing soccer, biking, and anything that involves the outdoors! 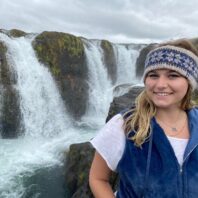 Meg Southard is originally from upstate New York, and she has lived most of her life in Indiana. She graduated with a neuroscience B.S. and Spanish B.A. in spring 2021 from Indiana University. Meg spent the following year working as a lab technician, researching novel binding sites on the ErbB4 receptor. During this time, she also worked as a teaching assistant for a molecular neuroscience lab course at Indiana University and realized she really enjoyed teaching, especially in a hands-on lab setting. While her background is in the molecular neuroscience of receptor tyrosine protein kinases, Meg has also always been interested in studying drugs of abuse and how they affect the brain’s reward circuitry. So, this is the research, she plans to pursue as a Ph.D. student at WSU! She likes to hike, ski, and read in her free time. She loves animals and has a pet cat and gecko. Meg is also a self-proclaimed Star Wars nerd. 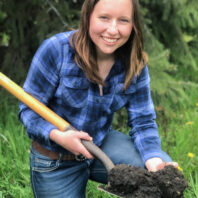 Natalie Strum grew up in suburban Chicago with no rea; ties to agriculture but a passion for the environment. At age 13, after taking a class that discussed the linkages between environmental quality and human nutrition to farming, she knew she’d found her calling. She wanted to farm and help others farm in a way that improved the environment, human health, and farmers’ livelihoods. Natalie became involved in as many aspects of agriculture she could – from 4-H to working on farms to conducting agricultural research as an undergraduate. During her master’s program, she channeled her passion into a goal to solve agronomic and environmental issues through research and promoting effective farm-management practices. When Natalie’s not farming or researching, she enjoys gardening, board games, skiing, and hiking. 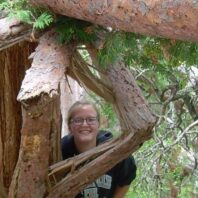 Marita White was born and raised in St. Paul, Minnesota, where she also earned bachelor’s degrees in biology and biochemistry from Bethel University. At WSU, she will conduct research on club wheat to improve its aluminum tolerance, as well as investigate the role of soil microorganisms in aluminum tolerance in wheat. Her personal interests, apart from plants, include dragonflies, fishing, playing violin, being outdoors, and reading. Fun fact: Marita shares a birthday with her older sister, even though they’re not twins.