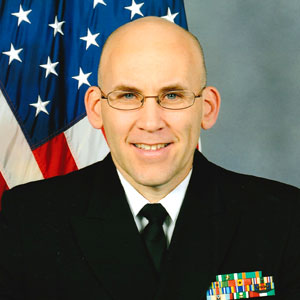 “Last summer, as Ebola spread in West Africa, I said that fighting this disease had to be more than a national security priority, but an example of American Leadership,” said Obama. “We are here today to thank the troops and public health workers who headed into the heart of the Ebola epidemic. They represent what is best about America.”

Commander Pimentel, PhD, MSC, USN, couldn’t believe he was there, standing right behind the President. When he received the news that he would be recognized by the president for his work in Operation United Assistance in Liberia for the Ebola epidemic, one of the first things he did was call his mother in Puerto Rico.

“She could not believe it,” said Billy. “I never thought I would be shaking the President’s hand. I come from a poor family in Puerto Rico and was a first-generation college student. This was too surreal.”

The President continued. “Billy led a team of Naval microbiologists to set up mobile laboratories that can diagnose Ebola within four hours. And he said, ‘It has been an honor for us to use our skills to make a difference.’ These values – American values – matter to the world.”

Billy’s journey to the White House began in Puerto Rico, where at 17 years old, he joined the U.S. Naval Reserve as a hospital corpsman and served during the first Persian Gulf War. After completing his enlisted career, he used his veteran’s benefits to earn a bachelor’s degree in industrial microbiology and a master’s degree in biology from the University of Puerto Rico. When he began searching for a doctoral program, of the top three he looked at, he decided to go with Washington State University.

“I decided to go with the best,” said Billy. “Drs. Lori Carris and Jack Rogers invited me to apply, and even though my GRE scores were low because English is my second language, they let me in and believed in me. I never thought I would have that opportunity. Ultimately, I feel like I owe my success to WSU.”

Steve Burkett of the WSU Graduate School was able to award Billy a research assistantship, providing him with the needed financial support for his program for his first two years, and Carris was able to secure an assistantship for him for the rest of his program. When Billy and his family arrived at WSU in the winter of 1995, it was a culture shock. His wife and two young children had never been out of Puerto Rico and that first winter was pretty cold in Pullman.

“Our first winter there the temperatures were minus 20 degrees,” said Billy. “But the people were so friendly and nice. My oldest son at the time was three years old and within just three months was speaking English. Our four years at WSU were the best for our family.”

Billy completed his Ph.D. in plant pathology with a concentration in mycology and population genetics under the supervision of Lori Carris in 1999, and was commissioned as a Lieutenant in the Navy that July. His first duty station was the Naval Medical Center in Portsmouth, VA, where he was head of the microbiology department.

Second Tour: The Land of the Pharaohs

“I had wanted to go into academia because I love teaching,” said Billy, “but joining the Navy was a good career choice.”

In Portsmouth, Billy taught at the Old Dominion University and enlisted personnel going through the Advanced Lab Technician program. He was then transferred to the Naval Medical Research Unit #3 (NAMRU-3) in Cairo, Egypt for nearly seven years, from 2003 – 2010. There, he had the opportunity to teach microbiology courses to laboratory personnel from multiple Middle Eastern and former Soviet Union countries.

“That was very fulfilling,” he said. “It made me change my perception of who we are as humans – that we are global citizens and that we need to give back.”

When the Ebola epidemic began in 2013, there were limited laboratories in West Africa capable of detecting Ebola. In August 2014, the World Health Organization put in an official request to the U.S. Embassy in Liberia for laboratory assistance. At that time, Billy was in charge of the only four Navy rapid deployable mobile laboratories responsible for the detection of biowarfare agents and infectious diseases. Built to be quickly deployed, the laboratories weigh only about 1100 pounds. In September 2014, the Department of Defense flew Billy into Liberia to look at a location where two of his mobile laboratories might be placed. Within 14 days two labs were set up and fully operational.

“Before we arrived in Liberia, it was taking at least seven days to get Ebola lab results back to the physicians at the Ebola treatment units,” said Billy. “With my labs, the results took only four hours.”

Suspected Ebola patients waited in a common room at the Ebola Treatment Units, and some of those patients may not have had the disease. Long delays in getting lab results could have been a factor in the spread of the outbreak. The mobile labs were able to confirm true cases rapidly and assist placing patients in quarantine quickly.

“My laboratory at the Island Clinic ETU provided critical laboratory services and within just three weeks confirmed cases of Ebola had dropped significantly there,” said Billy.

“We are a force multiplier,” said the President during the press conference. “Today marks a transition in our fight against this disease. Ebola treatment units have been built, over 1,500 African health workers have been trained, and volunteers around the world gained the confidence to join the fight.”

As the only mycologist in the Navy, Billy is adamant about the role his time and education at Washington State University has played in his success.

“Washington State University taught me to think outside the box,” he said. “Earning a Ph.D. is not about becoming an expert, it’s more about learning how to think and solve big problems. My mentors at WSU were dedicated and believed in me. Dr. Carris said that with strong dedication, you can do miracles, and when I’m working, I sometimes think, ‘What would Dr. Carris do?’ I am extremely proud of my education at WSU and believe I owe it my success!”

Pimentel’s next assignment will be Executive Officer, second in command, at the Naval Medical Research Unit #6 in Lima, Peru, where he will serve for two years. When he retires from the Navy, he thinks that teaching at a community college would suit him. What would he like to tell graduate students? “They can use their knowledge to make a difference in the world. With a graduate degree, the sky is the limit,” he said.

“What makes us exceptional,” said Obama, “is when there’s a big challenge and we hear somebody saying it’s too hard to tackle, and we come together as a nation and prove them wrong. Thank you all for proving again what America can accomplish.”

View the President’s press conference about the Ebola response on C-Span: http://www.c-span.org/video/?324305-1/president-obama-remarks-combating-ebola. 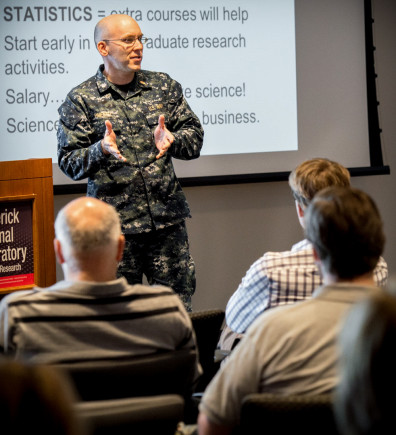