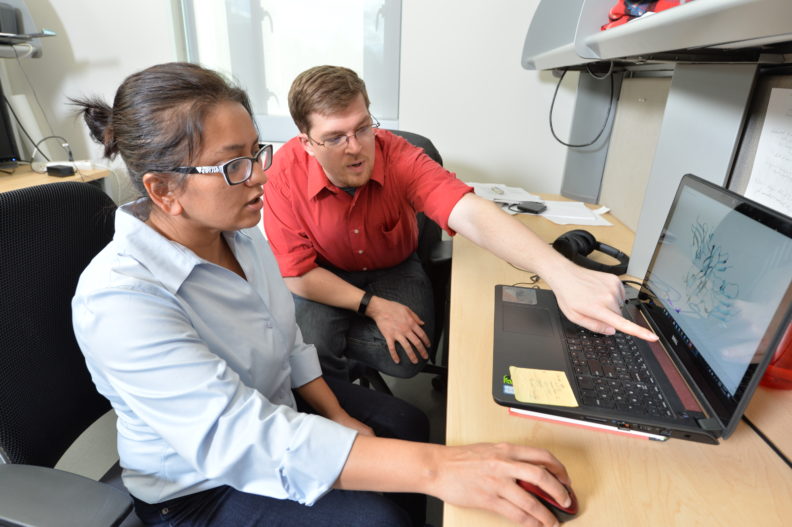 When someone close to you is diagnosed with cancer, it can change your life perspective — and sometimes your life projectory. For Kevin Gray, a WSU doctoral graduate, the diagnosis drove him to a new passion and the ultimate creation of a biotechnology company to develop novel cancer treatments.

“I was in my second year in undergraduate school when my dad was diagnosed with a rare and aggressive kind of cancer,” says Kevin, co-founder and principal inventor of Chimeric Designs Inc. “It kind of flipped my world upside down and freaked me out.”

Kevin did what most do in this situation: he turned to the internet to research cancer treatment. A year later, he was in a class on cancer biology and technology where guest speakers visited from large universities across the nation. “It was like listening to a rock star every week,” Kevin recalled. It was then he decided to pursue a career researching cancer technology.

Kevin and his business partner, Afshin Kahn (left above), started Chimeric Designs Inc. as a spin-off of Kevin’s co-curricular research internship. The company is committed to researching more effective techniques in chemotherapy treatment to reduce post-treatment impacts on patients. Chimeric Designs, incorporated in May 2017, was recently awarded a Commercialization Gap Fund from the WSU Office of Commercialization to support the advancement of its products to the marketplace.

The two entrepreneurs have an impressive array of degrees. Afshin earned a bachelor’s degree in biotechnology and genetics in India, a master’s degree in applied biomolecular technology from University of Nottingham in UK, and a Ph.D. in environmental sciences and natural resources with a focus on geomicrobiology and astrobiology from WSU. She pursued many interdisciplinary projects between geological sciences and microbiology, and currently teaches earth science courses at WSU. Kevin has a bachelor’s and master’s degree in chemical engineering from Georgia Tech, and completed his Ph.D. in chemical engineering at WSU in 2016 under WSU faculty member Dr. Alla Kostyukova.

Kostyukova pushed Kevin to come up with theory-based solutions to real-life problems during his doctoral work. His Ph.D. research was accepted into the WSU NIH Protein Biotechnology Training Program, which is designed to enhance graduate student experiences through interdisciplinary training to produce versatile scientists and engineers. Through the program, Kevin did an internship with Seattle Genetics, the first company to develop antibody-drug conjugate technology, a cancer therapy that combines targeted cell treatment with cytotoxic potent chemotherapy drugs— a paradigm-shifting discovery. The training was an important catalyst for Kevin.

During cancer treatment, typical chemotherapy drugs kill cancer cells, but have no ability to tell the different between a cancer cell and a normal cell aside from identifying rapidly dividing cells. Cancer cells rapidly divide, but so do cells that live in hair follicles and cells in a subsection of the brain engaged with keeping memories. Thus, those who go through normal chemotherapy rapidly lose hair and experience “chemo-fog.”

After Kevin returned to WSU from his internship with Seattle Genetics, he realized he could bring about a huge change in chemotherapy treatment with antibody-drug conjugate by attaching drugs to specific proteins that would target and attach to only the cancer cells.

“It almost seemed like the early twentieth century when the Wright Brothers were talking about flying planes, but the idea of people flying didn’t make sense then,” says Kevin. “It put me in a different time and space.”

The internship with Seattle Genetics and exposure to the new anticancer technologies had a profound effect on Kevin. He wanted to research further and began considering starting his own company. He teamed up with Afshin and Alexander Brown, a Ph.D. student in molecular biosciences and genetics expert. He also brought in Brian Lamb from the WSU Office of Commercialization and Joe Harding, a faculty in the Department of Integrative Physiology and Neuroscience. Harding owns a biotechnology company in Seattle that is currently conducting phase I clinical trials. With funding from the WSU NSF Innovation Corps grant in March 2017, Kevin and Afshin developed Chimeric Designs, Inc. They also received funding from the Washington Research Foundation, Office of Commercialization, and Carson College of Business, and are currently pursuing additional grant proposals, including the WSU- Amazon Catalyst funds, and Small Business Innovation Research (SBIR) grants.

Afshin and Kevin have numerous ideas around a broad spectrum of product development. “There are different segments along the way that can be called a product or a technology,” Kevin explains. Right now, they are developing an antibody molecule prototype that would demonstrate if it can modify anything it is asked to modify— a better drug delivery molecule that can make chemotherapy more efficient.

Their first product will be developed through pre-clinical trials and then passed to a chemotherapeutic drug-developing biotechnology company that can take their idea through clinical trials and finally to the marketplace. The final product that can be administered to the patients must go through FDA clinical trials, an approximate $20 billion investment. Chimeric Designs does not currently have that capacity.

“Our initial customers will be large biotechnology companies,” says Afshin. “Chimeric Designs will license the technology and sell the ideas to generate funds to develop the next set of products.”

In addition to funding, Kevin and Afshin are receiving a great deal of other support from the university, such as lab space in the Veterinary Medical Research Building on the Pullman campus and assistance from the Office of Commercialization and Office of Research on writing their first patent. Their first prototype will have a WSU patent and Chimeric Designs Inc. will be the sole licensee of the patent, allowing them to do business with other companies.

Afshin views interdisciplinary research and collaboration as important for entrepreneurship. She has worked on the WSU Global Case Competition, where multidisciplinary teams of graduate and undergraduate students come together to solve global problems. Programs like I-Corps and Amazon Catalyst are trying to promote a similar co-working space, where people from all disciplines can collaborate and work towards a common project. She applauds WSU’s efforts to create these multidisciplinary, collaborative spaces for students.

Afshin and Kevin believe promoting entrepreneurship enables young researchers to see a bigger picture and encourages them to dive into research projects that can later become start-up companies. Kevin says that most of his motivation came from that initial cancer diagnosis—and an adviser who continuously encouraged him to work in interdisciplinary research.

The potential for Chimeric Designs Inc. to make strides in cancer treatment is a reflection of team research, innovation, and entrepreneurship, and also of Washington State University’s support and encouragement of student research and commercialization.