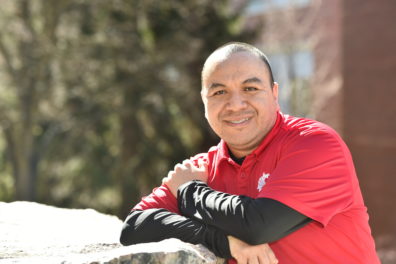 Washington State University doctoral student David Alpizar has been selected for a highly competitive internship this summer for ETS in Princeton, New Jersey. While there, he will be working on the TOEFL test, studying assessment, test score validity, and test fairness.

ETS has developed a number of student performance assessments used by universities, including the GRE, TOEFL, and Praxis. Alpizar’s work with ETS will draw upon his research in the field of educational measurement and psychometrics at WSU, where he has been working with Dr. Brian French in his psychometric laboratory within the Learning and Performance Research Center.

“David has the unique opportunity to work on ETS research surrounding new item types for assessments used at the graduate level,” says French. “He will work with a team of experts to investigate how these items may build better assessments to assist with making the best decisions about individuals.”

While Alpizar has always imagined working in academia, he looks forward to working in industry this summer and exploring the idea of a career there.

“It feels very surreal,” he said.

Alpizar came to WSU in 2015 to pursue a doctoral degree in educational psychology under the mentorship of French. While working on his master’s degree from California State University, Northridge, he attended a conference in Portland, Ore., where he presented a poster on his work. There, he met WSU College of Education faculty Sola Adesope, who believed Alpizar would be a good fit for the educational psychology doctoral program at WSU.

“But I’d never heard of that place,” Alpizar said—who immediately went home, checked out the program, and emailed French. French responded that he believed Alpizar would be a good match for his program and sent him information about the WSU Graduate School’s Research Assistantship for Diverse Scholars (RADS) program, which sponsors a campus visit, and, if selected for admittance, includes a research assistantship and tuition waiver. Alpizar was selected to visit WSU spring 2015.

“I liked it here,” says Alpizar. “It felt right—it felt comfortable, and I met a lot of friends during the visit.”

Alpizar was offered a research assistantship in French’s laboratory through the RADS program for fall 2015.

French was pleased Alpizar selected WSU and the Educational Psychology program as the environment to continue his professional development.

“David enjoys the complexities and technical aspects of the work,” he says. “He is able to negotiate and situate his work in the useful space between application and methodology to inform how we use measurement to better our health and learning environments. He brings a critical and positive energy to my laboratory, and is a team leader.”

Originally from Mexico, Alpizar moved to the San Fernando Valley in California in the early 1990s. He graduated from high school in 2000, then attended the Los Angeles Mission College for his associates degree and California State University Northridge in 2013 for his bachelor’s and 2015 for his master’s degree in psychology.

Although he began his education in mathematics, he quickly became interested in psychology while working as a tutor for adults with disabilities at Los Angeles Mission College.

“I developed an interest in teaching people with disabilities the skills to cope and to make information more accessible for them,” says Alpizar. “So I changed my major to psychology.”

As an undergraduate at Northridge, Alpizar received a Maximizing Access to Research Careers (MARC) scholarship, which helped train him for graduate research work.  When he began conducting research, he enjoyed the way that math statistics were used in psychology research, and realized his skills in mathematics would be valuable for his graduate work.

Alpizar’s master’s thesis, which examined whether widely used depression assessment, i.e., Patient Health Questionnaire (PHQ-8,) is interpreted the same among emerging adults of Mexican and Central American men and women residing in the United States, was published in the November 2017 Journal of Psychological Assessment, (https://www.ncbi.nlm.nih.gov/pubmed/29199838) a highlight of his career so far. He also co-authored two published articles last year in the Journal of Advances in Medicine and Medical Research and the Journal of Latina/o Psychology.

Alpizar will be starting his dissertation work this year around his research in French’s laboratory, including testing assessments’ psychometrics properties, and examining the performance, power, and precision of test statistics under several conditions (e.g., sample size). He will be taking his preliminary examination in fall 2018.

“David is a pleasure to work with,” says French. “His motivation and energy for his work is very high. Most importantly, he is intellectually curious, which enables him to drive forward on his ideas.”  Under French’s mentorship, Alpizar is the fifth doctoral student who has obtained such an internships in recent years, and is the second RADS student in two years to do so.