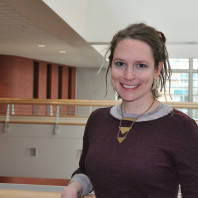 Antonie “Tonie” Bodley originally thought that when she earned her master’s degree and could teach, she’d be content. But when she submitted her master’s thesis topic to her major professor, he told her it was far too big; that it was more of a dissertation topic.

Tonie pared down her thesis to focus on gothic literature and steampunk film, but that original “big” topic wouldn’t go away. After teaching for a year in the WSU English Department, it became clear what she needed to do: pursue an interdisciplinary doctoral degree (IIDP) through the Graduate School. Her research? Science fiction and future studies: An exploration of artificial intelligence and androids.

The individual interdisciplinary doctoral degree is designed to meet the professional interests and research endeavors of each student, requiring the combination of three distinct disciplines. Tonie has been working to make a connection between the cultural and actual application of artificial intelligence in androids. Her research is a combination of philosophy, American studies, and English, with committee members from each field.

“For my research, I studied film theory and watched a lot of science fiction. I followed up with the theories, reviews, and philosophies behind the movies,” said Tonie. “I read a lot of philosophy of mind; keeping track of artificial intelligence updates. I follow the big minds, the theorists and developers of humanoid robotics.”

Tonie believes that by studying science fiction, we can emulate forward what the merging of the fields of artificial intelligence and humanoid might look like. Think of the movies Terminator and AI: Artificial Intelligence. Futurist studies—postulating the possible, preferable and probable futures and world views—concern a big, more complex world system as opposed to a narrower physical sciences perspective. Very few researchers have looked at the theory connecting artificial intelligence and humanoid from a social perspective and the cultural implications of how we may be changed by that scenario.

More than 75% of WSU IIDP students who have graduated within the last 10 years are in faculty positions nationwide. Universities appreciate the ability of faculty to make connections across disciplinary boundaries, making IIDP graduates highly sought after. Following graduation, Tonie hopes to teach classes on androids or become a consultant for companies that create robotics.