Enhancing the role of academia in community-based research

Nancy Carvajal Medina, Ph.D., is working to break stereotypes around homelessness and to build more empathetic communities across the Palouse.

Homelessness is a monumental, worldwide problem. According to the 2016 Annual Homeless Assessment Report (AHAR) by the U.S. Department of Housing and Urban Development, 549,928 people experienced homelessness in the United States on a single night in 2016. The majority (68%) stayed in emergency shelters, transitional housing programs, or safe havens, and 32% in unsheltered locations. More than one-fifth (22%) of homeless people were children below 14 years.

Nancy Carvajal Medina, a fall 2017 doctoral graduate in the Cultural Studies and Social Thought in Education (CSSTE) program in the College of Education has been working to develop more understanding and empathy towards the issue through her work at Washington State University and beyond.

With a B.A. and M.A. in language teaching, Nancy taught applied linguistics, critical thinking, English as a Foreign Language (EFL) didactics, and EFL research methods to pre-service teachers for 10 years in Tunja Boyacá, Colombia, where she spent the majority of her life working and studying. She also taught at the master’s program in Language Teaching at Universidad Pedagógica y Tecnológica de Colombia-UPTC. In 2010, she started exploring possibilities of academia-community collaboration to solve real life problems in Tunja, which was experiencing steady displacement and rural-to-urban migration of youth, children and families due to violence and capturing of farmlands by illegal arms groups. With the help of a non-governmental organization (NGO) called Juventas, Nancy supported its initiative to start a language school, and engaged pre-service student teachers through a volunteer program to teach the displaced youth and children on weekends.

“I founded the group Knowledge in Action (KIA) with the vision of making bridges between academia and the community,” says Nancy. “This vision is grounded in action. When I invited the members of KIA and other EFL pre-service teachers to volunteer and work with Juventas, I told them, ‘you will not get any grade, you will not receive any payment or any reward in exchange for this work, but you will fulfill your social responsibilities as educators.’”

During her work with Juventas, Nancy met a Fulbright assistant and was inspired to apply for a Ph.D. in the USA. She was one of six people out of about 300 applicants to receive a Fulbright scholarship in 2013 from Colombia in the modality Fulbright for the Regions.

For her doctoral research, Nancy was specifically looking for a program that emphasized critical thinking rooted in action. She chose the WSU College of Education for its emphasis on critical studies and social justice, which enables students to critically reflect on social justice issues through a variety of methods, thereby developing an understanding of alternative narratives.

Nancy recalls the first class she took at WSU. People were introducing themselves with various labels such as sex, gender, race and ethnicity. “This is when I could only think about myself as a human being under construction,” says Nancy, who thinks these labels are peripheral, visual, and constraining as there are multiple assumptions and expectations attached to every label. “I respect people’s ways of self-identifying. I understand the political and cultural ground on which they do it. But personally, I believe no label may be ascribed to reflect the complexity of humanity. More than labels, my words, actions and relationships are what really defines who I am and who I may become. Society expects people to self-impose these labels on them. So I wanted to go under the skin and find ways to connect us all through our understanding of humanity.”

Discovering identities “Under the Skin”

Growing up as a Mestiza, the dominant ethnic group of Colombia, Nancy did not face the stereotypes and discrimination tied with race and ethnicity, but she did face social discrimination as a woman, and fought her way to pursue post-secondary education. These complexities and multiplicities of identities were the inspiration for the workshop series she conceived and titled, “Under the Skin,” a dialogic community that offers a welcoming space to share stories, transform interactions, and dismantle stereotypes and labels, thus facilitating personal and community healing processes.

“People have called this space home and a safe space. That is a very meaningful connection in times where the political climate is reducing the spaces to feel safe and be yourself,” Nancy explains in her dissertation.

So far, she has organized 11 interactive workshops on various themes, such as painting, writing, photography, yoga and meditation. “People were ready to be open and vulnerable. We heard others’ stories, hugged each other and cried for them, although we didn’t really know them. People rekindled their desire to paint, draw, sing, or dance.”

These experiences with stereotypes and identities made Nancy further think about her work with the displaced youth and children in Colombia—a work she could not continue due to financial and administrative constraints. She spent her first year at WSU trying to understand meanings and contexts of displacement in the US. She found two shelters in the Pullman-Moscow area that offer services to unstably housed people, and has been working and interacting with the people in Sojourners Alliance, in Moscow, Idaho for almost three years now. To gain their trust and confidence, she lived at Sojourners Alliance for five weeks.

“It was then the people grew to trust me and share their stories,” she said.

Nancy says that the root causes of homelessness are not always associated with individual responsibilities, but often with structural causes such as a lack of affordable housing, lack of jobs, increase in rent prices, etc. Some people might have made decisions in their lives that led to homelessnesss, but those stories also have layers of complexity.

“My work concentrates on breaking the stereotypes around homelessness to raise awareness that homelessness is not always a choice, and homeless people, instead of being stigmatized, should be offered a second chance. The word house is about a structure, whereas home is about family and emotions.These people lack a house, but not necessarily a home.”

Nancy organized three workshops in August 2017 with the support of Neil Public Library in Pullman titled, “My story is the only thing I own. Houseless’ Testimonios of Survival and Resistance.” The workshops were an attempt to engage the larger community in focused dialogue and to develop empathy among those who have not experienced oppression towards houseless people. The testimonials featured stories of middle class people, many of whom do not fit into the stereotypes of drug addicts, alcoholics, mentally ill or the criminal, who ended up experiencing homelessness due to different social circumstances.

“Sometimes, these stories are complex and difficult to understand when you have lived in your own world of privilege,” says Nancy. “In the last workshop of the series, one person shared that she had met two middle class families who had lost everything overnight. Their experience was similar to the stories we heard in the workshops. She mentioned that discussing some of the issues about housing instability in the workshops allowed her to empathize without being judgmental.”

Nancy considers this a unique opportunity to dismantle stereotypes and understand the intricacies of housing instability.

Through community-engaged work, academia can help remove the stigma around homelessness, and other such multi-layered complex issues in society. Nancy is grateful to the houseless people who shared their stories, the administration of the homeless shelters, and her advisor Dr Pam Bettis in the College of Education for their support of her work. She plans to return to Colombia to continue her work with the issues of homelessness and help bring about long-term positive changes in society. 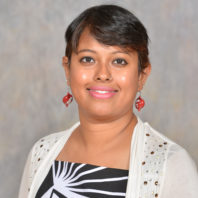 Dr. Kakali Chakrabarti is a fall 2017 graduate of the Murrow College of Communication and a research assistant in the Graduate School.