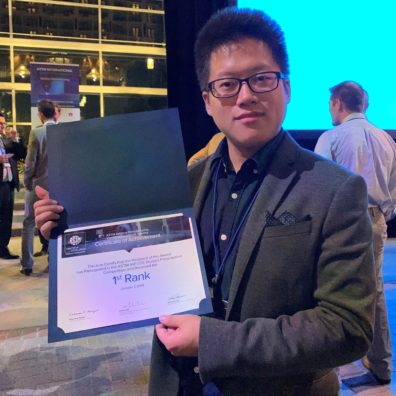 Used coffee grounds aren’t only good for your garden. Now they can be used to make tougher, biodegradable plastic, thanks to the work of doctoral student Yu-Chung Chang. On a quest to improve the strength of plastic, Yu-Chung came to WSU’s Materials Science and Engineering Program in 2015 and began to focus on how to create a new 3D printing material.

“The most novel part of my research is that waste coffee grounds are added to PLA (poly-lactic acid), which is the type of plastic commonly used in 3D printing,” said Yu-Chung. “I improve the toughness of the plastic and also make the waste product useful.”

In October 2019, Yu-Chung won first place for his research paper on 3D printable coffee/PLA polymer composite at the 4th International ASTM Symposium on Structural Integrity of Additive Manufactured Materials and Parts. The symposium, which took place in Washington DC, strongly emphasized the interest in additive manufacturing standardization and was attended by experts and leaders from more than 20 countries.

3D printing has become popular in recent years because of its ability to cater to individual unique needs. With a B.S. in material science and engineering, Yu-Chung became interested in 3D printing after starting his Ph.D. in the same program at WSU. Aware of the weakness of many products made from PLA, such as food packaging, Yu-Chabg began to consider adding materials that would add strength and also be environmentally friendly and easy to acquire. PLA is a green plastic extracted from corn starch and can biodegrade in a relatively short time, so finding a new material to combine with PLA that was also biodegradable was paramount.

After a meeting with his colleagues, Yu-Chung—an avid coffee fan—came up with the idea of adding coffee grounds to PLA because of its material property as well as its ample availability. “The shape of the fiber of coffee grounds is rounded, which allows it to withstand pressure and strike,” explained Yu-Chung.

Instead of using coffee grounds left after making coffee, Yu-Chung utilized grounds that had been squeezed to produce coffee oil after coffee was made, which he called “the waste of the waste.”

“The best thing of the waste coffee grounds is that they are odorless and have no cost,” said Yu-Chung.

“A small change in the amount of coffee ground will result in different properties of the plastic,” said Yu-Chung. He eventually found that plastic with 20% coffee grounds met his expectation for the toughness he was looking for. “The toughness increases more than 400% over the pure PLA,” he said.

At the same time, though, he realized an important weakness of his plastic: it would become soft when the temperature was above 60° C (140° F). For that reason, it could not be used for making objects like coffee cups, but it could be useful in making protective gear for sports or applications that require higher toughness, which will be one of Yu-Chung’s future research focuses.

Passionate about educating others about 3D printing, Yu-Chung helped establish a 3D Printing Club at WSU in 2015. He desired to help students from different disciplines become familiar with what 3D printing is and how it works to make products. He also volunteered at the community’s Palouse Science Discovery Center to teach children about 3D printing. Because of his volunteer work and leadership, Yu-Chung was awarded the President’s Award for Leadership by WSU in 2017.

Most recently, Yu-Chung and members of the 3D Printing Club begin to design a 3D printer—a project that has received grants from his program.

“Material engineers usually have two important missions,” said Yu-Chung. “We want to improve existing materials and create new ones. I aim to do both and to also continue educating others about the 3D printing technology.”

Find out more about WSU Material Science and Engineering Program

WSU has the largest interdisciplinary doctoral program in materials science and engineering in the Northwest. This program enables students to have access to a wide range of state-of-the-art research facilities from mechanical, materials, civil, chemical and bioengineering, physics and chemistry.