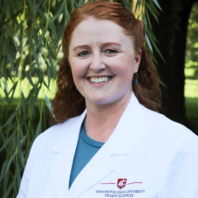 Spokane native Ruby Siegel is not your average Washington State University Ph.D. student: she spent 17 years working in a clinical laboratory and raising a son between earning her degrees. At 43, she’s older than most of the other students in her research program in pharmaceutical sciences in the WSU College of Pharmacy. One of the youngest of her fellow students is only 20, and Ruby jokes that her son is older than that.

Returning to school after investing so much time in her career wasn’t easy. “Planning ahead” was her theme as she looked at schools, assistantships, and degree programs. One of the biggest hurdles she found in transitioning back to being a student was the pay cut— the graduate student stipend she earns now is considerably less than her recent salary as a lab supervisor.

So why go back to school at all? Ruby has her eyes set on becoming the director of a clinical lab, and in order to reach that goal she’ll need a doctorate. Beyond that initial motivation, however, other possibilities may become available: earning a doctorate will open the door to different areas in the pharmaceutical industry, new and exciting fields of research, or even a job in academia.

Her advice to other adult learners thinking of pursing graduate degrees is to just jump in, take the first step, and move on from there. “It’s easier to steer a car that’s moving than one that’s standing still,” she says. “You can get caught up in the details of planning, but just take that first step and it will all fall together.”

Going back to school, Ruby says, has helped her realize that she was becoming intellectually stagnant in her field. She’s had to work hard, reviewing basic biochemistry and molecular biology, while switching back to the mindset of a student with homework and assignments. At the same time, she says she has been “craving to learn” and didn’t realize it. “I feel like a battery being recharged,” she says with excitement.

Since she was awarded her master’s in 2000, there has been an exponential growth of knowledge in the fields of histocompatibility (a field of medicine that matches organ and marrow donors with possible recipients and identifies why and how an immune system may reject a transplant), genetics, and immune responses. Ideas that were just surfacing as theories when she first studied them are now being utilized in novel laboratory tests and treatments.

She brims with enthusiasm when talking about the research opportunities available to her, the faculty she’s studying under, and even the laboratory facilities on the WSU Spokane campus.

At the moment, she’s studying retroviral vectors under Dr. Grant Trobridge. Research in his lab aims to improve retroviral vectors which can be used for gene therapy for patients who have inherited a defective blood or immune gene. The viral vectors can permanently insert correct copies of the gene into autologous (“self”) blood stem cells from the patient, which can then be transplanted back into the patient to “reboot” their bone marrow and blood system with the correct gene. If it sounds a bit like science fiction, that’s because it’s still an investigative therapy. “It’s not used routinely to treat patients yet. Laboratories like Dr. Trobridge’s are still working out safety issues,” clarifies Ruby. Occasionally, the retrovirus gene insertion disrupts a necessary gene or activates unwanted genes.

Ruby’s program will allow her to do more than one rotation before choosing her PhD project. She is also interested in working in Dr. Salah Ahmed’s lab. His research is focused on the inflammatory processes and tissue damage in rheumatoid arthritis: how it occurs, and which genes or proteins to target for therapy.

These two labs appeal to her because her master’s degree is in biotechnology and much of her previous work experience had to do with to transplants and the genetics of immune responses.

She has a practical attitude when facing setbacks and discouragement: “You have to keep your eyes on the ultimate goal,” she says. “In scientific fields, you want your experiment to work, but you can learn from negative results as well. A number of major scientific discoveries were accidents or unintended results. I will learn something whether my experiment works or not.”