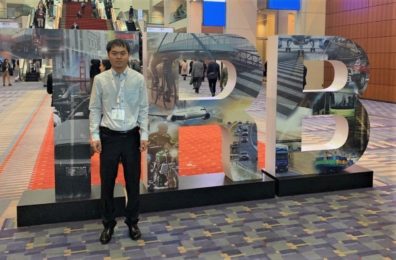 Sen Du, a Ph.D. student from the Department of Civil and Environmental Engineering on the WSU Pullman campus, won first place for the Outstanding Graduate Student award, granted by the International Association of Chinese Infrastructure Professionals. The Association is a U.S. registered, non-profit professional organization whose members work or study in the fields of Civil Infrastructure and Systems and related areas.

This was Sen’s first time winning this award. “It greatly inspires me to complete my dissertation defense this spring and continue researching and working in the academic field,” he said.

Sen joined the WSU Transportation Engineering Ph.D. program in 2017, after finishing a two-year exchange program at WSU. Now, he is pursuing a dual Ph.D. with Harbin Institute of Technology, (China and WSU), mentored by Dr. Xianming Shi.

Sen’s research focused on improving concrete. Specifically, he added coal fly ash, a coal combustion product from coal-fired boilers, to concrete to replace cement, a traditional and significant component of concrete. His goal is to maintain the strength of the concrete while improving its durability, like its resistance to freeze-thaw cycles.

“The reason to replace cement is because it’s not environmentally friendly. Producing it consumes a lot of energy and releases a large amount of carbon dioxide,” said Sen. “Using fly ash to replace cement in concrete should be a good solution.”

This solution, in fact, was tried before in the civil engineering area, yet there was no consensus on how much fly ash could be added without compromising the durability of the concrete. Whereas the transportation industry has routinely used 20 percent of fly ash for cement replacement in concrete, Sen added 60 percent of fly ash, together with a small amount of nano-materials, like nano-silica.

Sen attributed the success in producing this high-volume fly ash concrete to how he added the nano-silica. Instead of simply mixing it and other materials together, Sen employed a targeted approach: He targeted the nano-silica around the interface between the paste and coarse aggregate to improve the strength and durability of this specific area, the commonly believed weakest part of the concrete.

Sen also considered the implementation of his concrete. He believes this new concrete has as good or better mechanical properties, and durability performances like he traditional one. Also, it costs less and has a reduced environmental impact over its life cycle, because fly ash is considered industrial waste material. These advantages offer the potential of applying the concrete in real-world settings.

However, Sen noticed the concrete had its limitations. “The biggest one derives from the variability in properties of the fly ash,” said Sen.

In Sen’s experiment, the fly ash was from a coal-fired power plant in Oregon, but if it came from another location where the quality of the coal and technique of using the coal was different from those in this power plant, the properties of the fly ash might be different as well. In this situation, additional research was needed to ensure the resulting concrete was of reasonable quality, strength, and durability.

The limitations motivated Sen to continue his explorations in this area. “Curiosity about the unknown is what always drives me to learn and research, and implementation is what researchers always need to take into account,” said Sen.