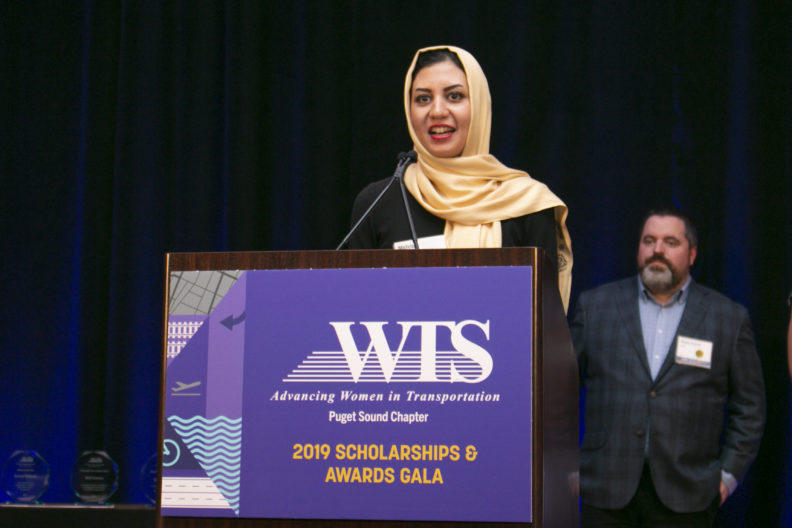 Mehrzad Mehrabipour, a Ph.D. student in the Department of Civil and Environmental Engineering, earned a number of accolades in 2019 including a $5,000 Helene M. Overly Memorial Graduate Scholarship and a WSU President Leadership Award. The President’s Award honors those who have demonstrated exceptional leadership and service to students, WSU, and the community.

The Helene M. Overly Memorial Graduate Scholarship is awarded by the Women’s Transportation Seminar (WTS) Puget Sound and reflects a dedication to service and the spirit of determination. The competitive scholarship is based on applicants’ goals, academic records, and transportation-related activities.

In 2017, Mehrzad was inspired to establish the Institute of Transportation Engineers Student Chapter at WSU (ITESC-WSU) with a goal to familiarize students with the transportation engineering field.

That experience inspired her to establish the ITESC-WSU. Mehrzad and her partners organized several activities to involve students in learning and exchanging information related to transportation engineering. The activity that impressed Mehrzad the most was the one in which she invited three guest speakers from the SEPI Engineering and Construction Inc. in North Carolina to talk with WSU students. Students gave positive feedback on the activities, and Mehrzad later found a note from a student that read, Thanks so much for all the good times. I wasn’t part of the ITE but I always felt accepted and welcome.

“It just made my day. I feel like if we could provide a good time just for one person, all our hard work is paid off,” said Mehzrad.

Mehrzad also served on the Graduate and Professional Student Association (GPSA) in 2017-18. She hoped to increase awareness of transportation engineering at the university level and grow her ITESC-WSU membership as well as advocate on behalf of graduate and professional students in various decisions.

After studying civil engineering for so many years, Mehzrad’s passion has increased because she is more aware of how transportation improvements can affect society. As a researcher, she wants to contribute to creating smarter, safer, and more efficient transportation systems.

“Mehrzad is a dedicated and smart student with tons of energy,” says her advisor, Ali Hajbabaie. “In addition to being excellent in her coursework and research, she participated in several extra-curricular activities. She has shown to be a very good independent researcher and at the same time a great team member. She pays attention to details and all these characteristics have made her a successful engineer.”

Hajbabaie’s research focuses on distributed and consensus-based methods for traffic control with connected and automated vehicles.

With a belief that refining a small process can enhance and impact the quality of an entire system, Mehrzad became interested in improving transportation systems as a critical need. During her master’s study at WSU, she contributed to the development of a novel methodology to create traffic signal timing plans for large-scale transportation networks in real time, which became the topic of her thesis.

“We noticed that in signal timing plans in a network of intersections, the real-time changes that capture traffic flows are very important components to consider. However, they make solving the traffic signal timing problem challenging due to the high computational complexity,” says Mehrzad.

To tackle the problem, she helped develop a coordination scheme to exchange information among sub-networks that provided signal timing plans in real time. For example, imagine a specific time of day when there are more vehicles in an intersection traveling straight compared to vehicles turning left. The signal timing plan based on her approach uses online information to process vehicles more efficiently by allowing, for example, more green signals to vehicles traveling straight.

In her doctoral program, Mehrzad has shifted her research focus from signal timing optimization to to finding optimal routes for drivers.

“Drivers may have millions of choices on their routes,” says Mehrzad. “Finding the optimal paths that minimize the total travel time is a complicated problem since it includes millions of decision variables with large spatial and temporal dimensions and complex traffic dynamics.”

“The methodologies can help policymakers, federal, state and local agencies, and companies that work on managing traffic congestion in urban cities use the most optimal routes,” says Mehrzad. “Therefore, we can alleviate traffic congestion and increase the capacity of infrastructure resulting in significant reductions in drivers’ travel time, delay, and vehicular emissions.”

Mehzrad’s leadership and promising research at WSU benefits the community and is a reflection of her passion and determination to improve societies worldwide.

The Ph.D. program in Civil Engineering at WSU equips students to have successful careers in engineering. Students consistently perform above state and national rates on exams and are actively sought following graduation. For more information about the Department of Civil and Environmental Engineering, visit https://ce.wsu.edu/.