Graduate student Charles Toye learns much on a mission to Ecuador 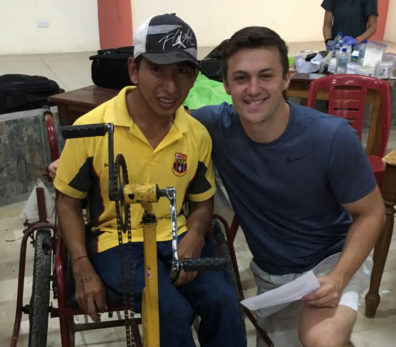 Charles Toye, a WSU master’s student in Hispanic Studies, participated in a program in Ecuador this July hosted by Hearts in Motion, a non-profit organization that provides quality medical care and education to improve the health and welfare of people in the U.S. and Central and South America.

“Charles was chosen because of his proficiency in the language and culture, his training as a translator, and his science background, but most of all because he is such a caring person and truly devoted to helping others,” said Dr. Ana María Rodríguez-Vivaldi.  She participated in Hearts in Motion to Guatemala for years and recommended Charles for the trip to Ecuador.

Recalling the trip, Charles felt grateful for being part of the program and for Rodríguez-Vivaldi’s recommendation as well as Dr. Kathy Beerman’s help during the time in Ecuador. More importantly, this impactful program caused Charles to amend his career path.

Hearts in Motion to Ecuador

The volunteer group conducted what they called a “Lab in Motion,” where they offered a free medical clinic that included services such as blood examinations, physical therapy, and dietary education to help local people foster better understanding of their personal nutrition and health.

“We found many people in Ecuador with diabetes or at-risk for diabetes because of their eating habits,” said Charles. “A lot of people pour sugar into their daily beverages like orange juice and coffee.”

Charles recalled a conversation between himself and a 40-year-old woman who had added sugar to juice every day since she was 16.

“When I asked her how many beverages with sugar she consumed every day, she firmly said ‘none,’” says Charles.

The woman’s response exposed a serious misperception in the community about sugar consumption.

“People seemed unaware that they were consuming sugar,” said Charles. “They believe squeezed fruit juice with added sugar is still natural and healthy. I explained that although the sugar could not be seen, it was there and was a causative factor in their diabetes.”

The volunteers clearly saw the need to educate the Ecuadorian population and help them establish healthy eating habits.

With his background in the Spanish language, Charles was also able to work as an interpreter to facilitate communications between volunteers and local people in Ecuador during his Hearts in Motion mission.

Born in Steamboat Springs, Colorado, Charles grew up in a community with a strong Hispanic presence. When he started to officially learn Spanish in high school, he quickly realized, “it was cool to talk with people in their native language.”

Charles later received his B.A. in Spanish with a minor in chemistry from Fort Lewis College in southern Colorado. Inspired by a trip to Spain in 2017, Charles then decided to pursue a master’s degree in Hispanic studies, and in 2018 joined WSU’s master’s program in Hispanic Studies.

Charles has volunteered regularly as a Spanish language interpreter, including giving time to the non-profit organization Comunidad Integrada since 2018. With his pre-medical background, he worked closely with Spanish-speaking patients in local clinics to facilitate understanding between the doctors, nurses, and Spanish-speaking patients. His work, he explained, provided hope and comfort for patients who seemed emotional and vulnerable when they felt misunderstood or did not fully understand their medical condition.

Charles recalled an important incident in his work as an interpreter when a limited English patient who had been struggling with lower back pain for months was frustrated by the lack of improvement in her condition. Within 20 minutes of helping her communicate with her doctor, Charles found a critical miscommunication that had occurred in her first appointment that drastically changed the way she used her medications and followed the doctor’s therapeutic recommendations. The 20 minutes Charles took to facilitate the communication changed the entire outcome of the patient’s care.

By using his skills to help bridge the communication gap between the doctor and the patient, Charles began to realize that his understanding of language combined with his pre-medical education could be extremely useful and satisfying for a future career.

Charles has worked as a teaching assistant since coming to WSU, which has fostered a more intense interest in teaching Spanish. When he traveled to Spain for the second time this summer, he took Spanish-specific foreign language pedagogical courses and engaged in hands-on teaching practices while also observing the European method of language instruction.

But it was his experience with Hearts in Motion that gave him a clear focus on the future.

“I now hope to combine both my Spanish language and medical knowledge in my future work. Maybe I will apply to a MD Ph.D. program, and after that I can share my medical knowledge to students in Spanish at a university,” says Charles.

Wherever he lands, Charles will carry with him a profound appreciation for the importance of the ability to communicate effectively across languages and cultures.

About the WSU School of Languages, Cultures, and Race

The School of Languages, Cultures, and Race strives to cultivate deeper understandings of linguistic, cultural, national, social, and racial perspectives in a global context. Find out more at https://slcr.wsu.edu/newsletter/